Previewing the Next Farm Bill: Unfunded and Early-Expiring Provisions 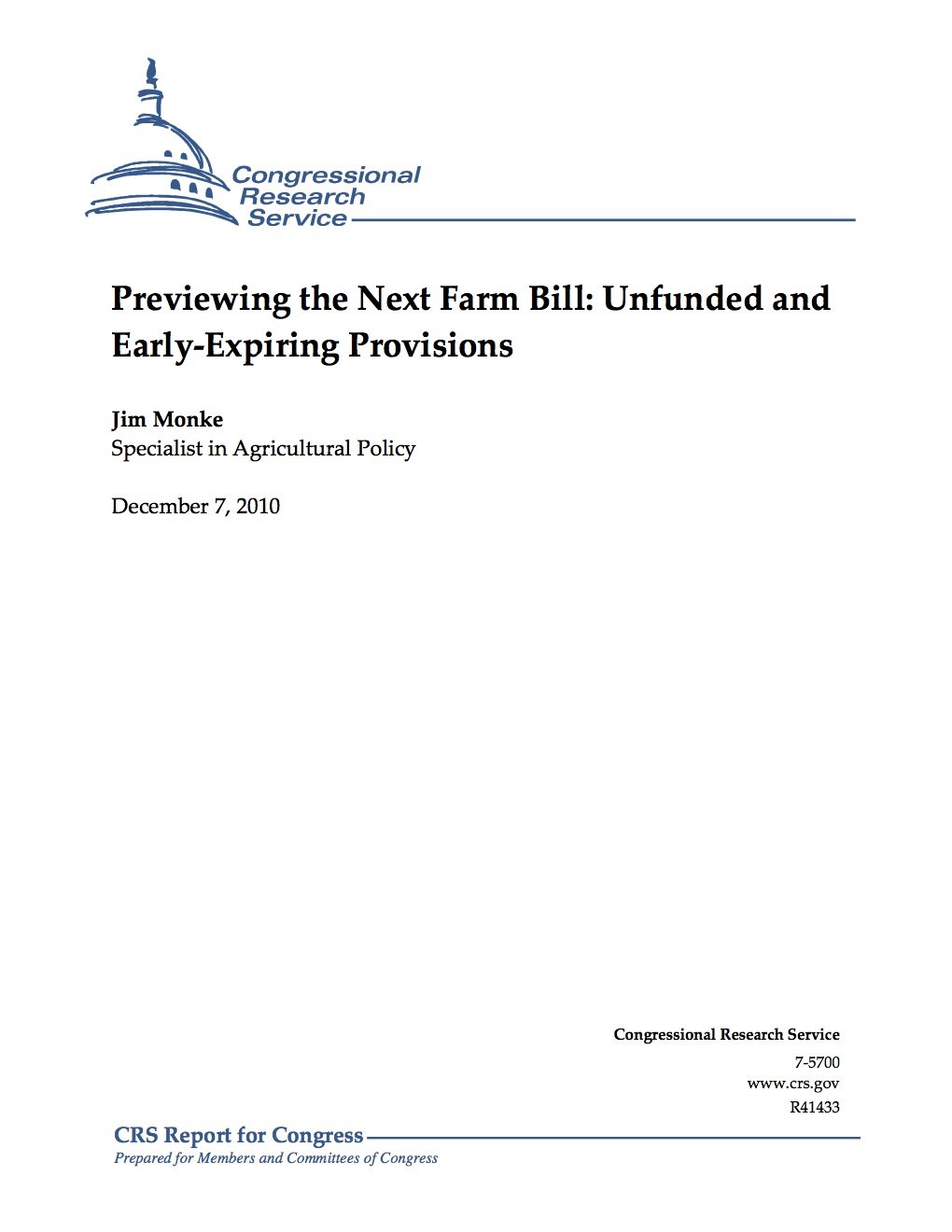 The Food, Conservation, and Energy Act of 2008 (P.L. 110-246, the 2008 farm bill) authorizes most federal farm and food policies. It also provides the mandatory funding for many farm bill programs, including the farm commodity programs and some nutrition, conservation, research, bioenergy, and rural development programs. Funding to write the next farm bill will be based on the baseline projection of the cost of these farm bill programs by the Congressional Budget Office (CBO), and on varying budgetary assumptions about whether programs will continue.Some farm bill programs have baseline beyond the end of the 2008 farm bill, while others do not. Thirty-seven programs that received mandatory funds during the 2008 farm bill are not assumed to continue from a budgetary perspective because they do not have a budgetary baseline beyond FY2012. If policymakers want to continue these programs in the next farm bill, they will need to pay for the programs with other offsets. Depending on the approach used to estimate a cost to extend the 37 programs for five years, $9 billion or $10 billion of offsets from other sources may be needed. This is about 4% of the $283 billion five-year total cost of the 2008 farm bill when it was enacted, or 11% of the approximately $100 billion five-year cost if the nutrition title is excluded. Finding this level of offsets may be a difficult task in a tight budget environment, especially when many observers believe that the next farm bill might be written within the confines of the existing baseline.The 37 provisions without baseline beyond FY2012 are spread among 12 of the 2008 farm bill’s 15 titles. The title with the most such provisions is the energy title (8), followed by conservation (5), nutrition (5), and horticulture and organic agriculture (5). Just three provisions—the agricultural disaster assistance program, the Wetlands Reserve Program, and the Biomass Crop Assistance Program, each with uncertainty about its future cost—account for nearly 75% of the $9 billion or $10 billion total.The 2008 farm bill’s authorizations generally expire at the end of FY2012, or with the 2012 crop year for the farm commodity programs. Separate from the funding issue, six farm bill provisions have an expiration date before the end of FY2012. These include the new supplemental agricultural disaster assistance program, and the suspension of term limits that allows some farmers to continue receiving guaranteed farm operating loans. Some tax provisions that are outside the jurisdiction of the agriculture committees were included in the farm bill and also expire early, including a conservation tax deduction and the tariff on imported ethanol.

Read NOW DOWNLOAD
These days there are lots of web sites designed for free to view Previewing the Next Farm Bill: Unfunded and Early-Expiring Provisions Books or online reading on-line, this page is one of them. You do not always need to pay to view totally free doc. We certainly have outlined the most effective kindle all over the world and gather it that you can view and download it free of charge. We certainly have tons of files directories ready to observe and download in almost any file format and quality

Previewing the Next Farm Bill: Unfunded and Early-Expiring Provisions Related